You may hear the term “isokinetic sampling” often, but it is likely that no one has ever explained what isokinetic sampling is, when it is required, why it is important and how one does it. This document hopes to change that, and by the end you should have a simple and clear understanding of isokinetic testing. It is our hope that you will come back to this series of guides from time to time to refresh your knowledge. By diligently learning and growing together we can make South Africa’s air the cleanest in the world!

You will see that this concentration is expressed as a mass (of chicken stock) per volume (of water). The air quality legislation is exactly the same. It expresses the mass of particulate matter (PM) per volume of gas. A limit of 50 mg/Nm3 means that there are 50 mg of PM in one cubic meter of air. A cubic meter of air is 1 000 litres and is roughly the volume of space underneath your desk at work:

3. What does “Isokinetic Sampling” Mean?

Iso = the same as

Isokinetic sampling involves extracting the sample at the same velocity as the stack gas is travelling up the chimney stack or in a duct.

4. Why is Isokinetic Sampling Important?

If one were to put a pipe in a stack and extract a sample at a high flowrate, one may draw more gas than particles because gas flows more easily than the particles. Conversely, if one were to draw a sample from the stack at a slow flow rate, then one may draw less of the gas that surrounds the particles. In both instances, one is changing the concentration through bad sampling technique. Let’s go back to the chicken stock example and imagine that after making the chicken stock, one gets distracted by a phone call. The chicken stock mixture settles before one comes back to taste the mixture. Because the chicken stock has settled to the bottom of the jug, the sample is dilute and tastes bland. The concentration at the top of the jug has dropped. One has very little chicken stock and too much water in the sample in one’s teaspoon. One’s sample is not representative! One should stir the jug of chicken stock and then pour some into a teaspoon to get a representative sample. Unfortunately, many occupational hygiene companies in South Africa sample inaccurately. They attach a small pump to a filter and draw gas out of the stack. The small blue pump in the next picture is an example of this. This is not isokinetic sampling and is not representative. These results are of no value.

These companies often report emissions that are much lower than the actual emissions. This misleads Air Quality Officers. An example of this is a boiler stack in Boksburg where 3 737 mg/Nm3 of PM was measured when proper isokinetic testing was performed. This was expected as a coal fired boiler that is not equipped with any abatement equipment typically emits ± 3 000 mg/Nm3 of PM according to literature. Previously an occupational hygiene company had measured only 8 mg/Nm3 on this stack. Needless to say, the sampling method was not isokinetic and 8 mg/Nm3 is impossible. Often these misleading results can be detected if photos of the testing equipment are provided in a testing report. The small blue handheld pump shown above is unacceptable and is not compliant with EPA Method 5. Proper isokinetic testing equipment is shown in the two pictures that follow. This isokinetic testing equipment can weigh up to 100 kg. 5. What happens during Isokinetic Sampling?

For testing to be isokinetic the sampling nozzle must:

1. Point into the flow, and

2. The velocity entering the nozzle must be the same as the velocity in the stack.

Let’s consider point 1. The photograph beneath shows the inside of a circular vertical chimney stack. In the background you will see a glass sampling nozzle facing downwards, into the upward stack flow. This glass nozzle is aimed correctly and is ready to sample isokinetically. The three sorbent tubes at the front of the picture are not sampling isokinetically as they are not facing the flow. 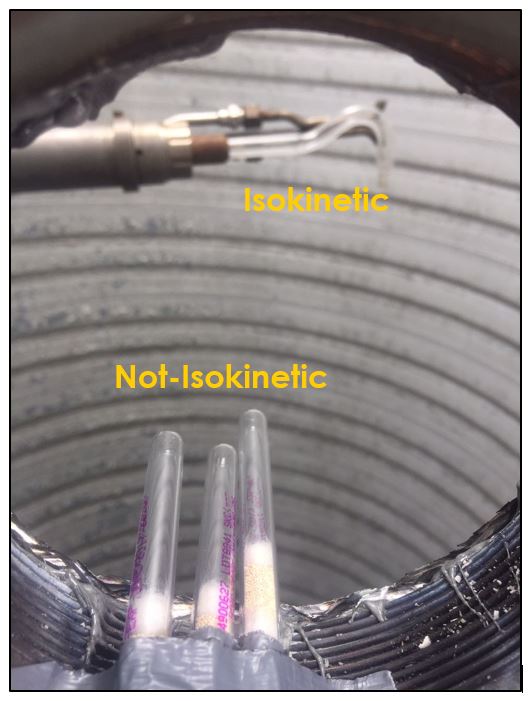 Now let’s consider point 2. The nozzle must extract the sample at the same velocity as the velocity in the stack. In Figure 1 below, the sampling velocity is exactly the same as the velocity in the stack. Sampling is therefore isokinetic. Only the gas that is directly beneath the nozzle enters the nozzle. The sampling process has not disturbed the flow or changed the concentration. In Figure 2, the nozzle is sampling gas at a higher velocity than the stack velocity. The nozzle therefore draws in more gas and fewer particles because particles have momentum and do not change their path as easily. A lesser mass of particles divided by a greater volume of gas results in a lower concentration being reported. In Figure 3, the nozzle samples at a slower velocity than the stack velocity. As a result, not all the gas that is directly underneath the nozzle can enter into the nozzle. Some of the gas diverts around the nozzle, but because of momentum, many of the particles that were entrained in that gas continue into the nozzle. Therefore, more particles are sampled, and an incorrect higher concentration is reported.

6. When is Isokinetic Sampling Required?

7. How does one Perform Isokinetic Sampling?

Firstly, the sampling must be conducted at the correct location on the stack. The ports must be located at least two diameters downstream from a disturbance to flow, and at least half a diameter upstream of a disturbance to flow. The exact criteria are explained in EPA Method 1. Testing should not be performed through only one port. The guide on the next page provides a concise overview. Secondly, one must sample at a number of points through each port. One must never sample at only one point, as the concentration can vary across the stack or duct. The stack or duct must be divided into equal cross-sectional areas, and the centre point of each area must be sampled as shown with yellow dots in the diagrams beneath for round stacks (left) and rectangular ducts (right). The number of sampling points depends on how many diameters the ports are away from a disturbance to flow (EPA Method 1). Now that the ports have been located on the stack, and the number of sampling points have been specified, one can begin sampling. One will need the following equipment as shown in EPA Method 5. 8. What is the Result of Isokinetic Sampling?

There are three things that one must obtain at the end of an isokinetic run:

1. The filter with the mass of PM.

2. The volume of gas that was sampled (and the temp and pressure of the Dry Gas Meter [DGM] that was measuring the volume).

The graph beneath shows the stack velocity in black and the sampling velocity in yellow. It is clear that they were almost identical and the difference between them is far less than 10%. This company has sampled very isokinetically on this day.

Looking at the graph above, it is interesting to note how much the velocity in the stack changes over time. It is immediately evident how non-isokinetic one would be, if one were to simply measure the velocity once at the start of the day and set the machine to sample at that velocity for the whole day. In this case, one would have measured ±20m/s at the start of the day, but most of the day the stack velocity was actually closer to 10m/s. That would be an unacceptable isokinetic deviance of 100 %.

9. What Mistakes are Often Made?

10. How Can an Air Quality Officer Know if Isokinetic Testing was Done?

We are here to help, and our advice is always free of charge. Please email us or phone us at any time. PM2.5 was reported as leading to 3 100 000 million deaths in 2010 (World Health Organization). It is critical that we all play a part in addressing fraudulent and substandard testing in South Africa, for the sake of the health of the communities that we serve.